Disfactory-save the farmlands by open source technology and crowdsourcing 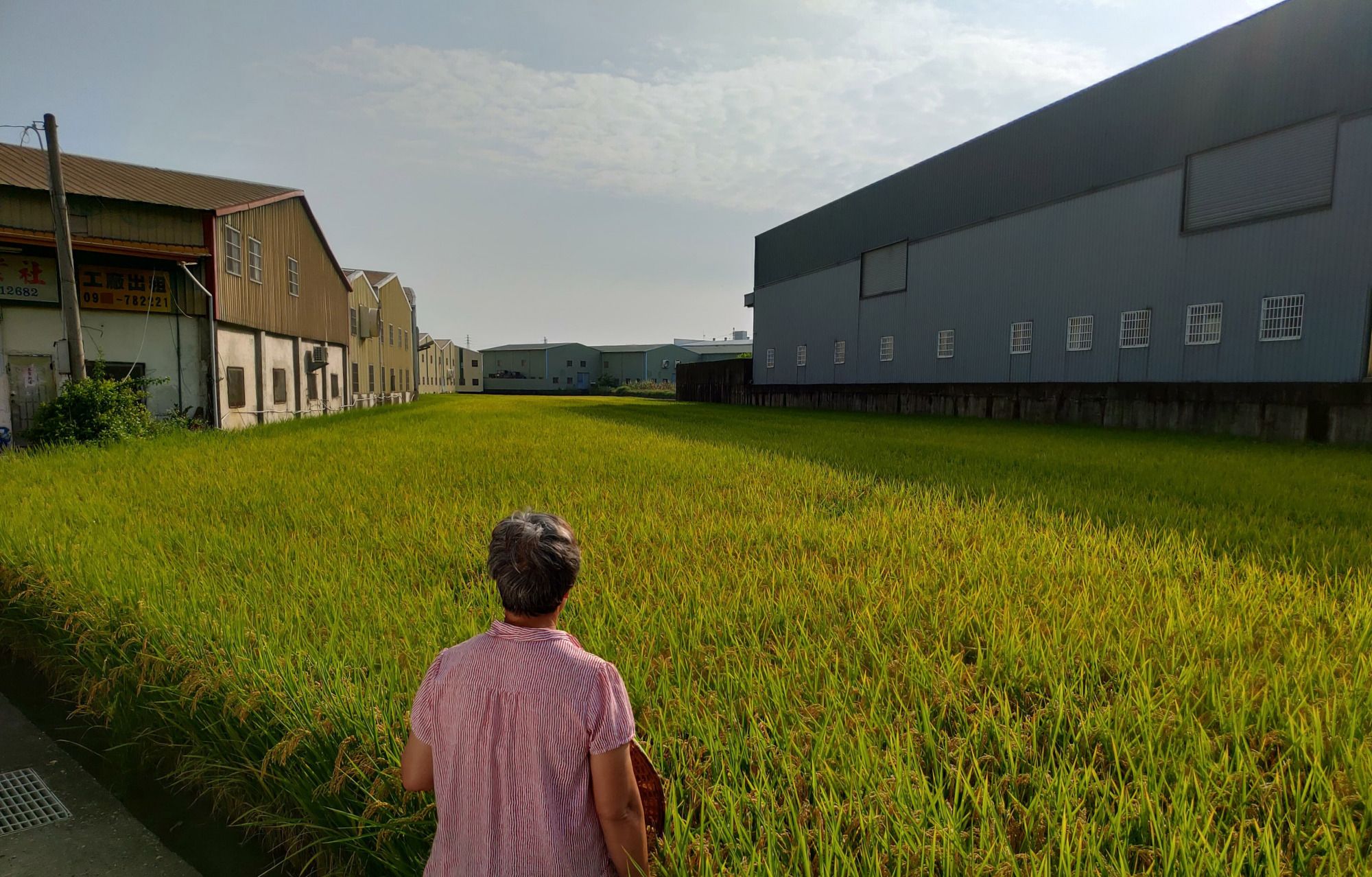 Taiwan is losing 1500 hectares of farmland through illegal usage per year. How does Disfactory by g0v use open source technology to solve the problem? (Source/Disfactory)

Imagine you are a farmer in Taiwan. There is a factory down the road emitting loud noises and an acrid smell. You have already gone to the Department of Environmental Protection to file a complaint, but only got cold, bureaucratic responses. Also, the factory’s owner is your uncle’s friend in a local gang, so you’re worried about the repercussions for reporting their factory.

What to do? You search on Google: “Is it possible to anonymously report polluting factories?” Google suggests that you go to a website called Disfactory, where you only need to upload a photo with a location pin to report an illegal factory on farmlands without revealing your identity. Once you report, the hosting non-profit organization, “Citizens of Earth, Taiwan” (CET), will file the report and follow up with all the necessary paperwork. 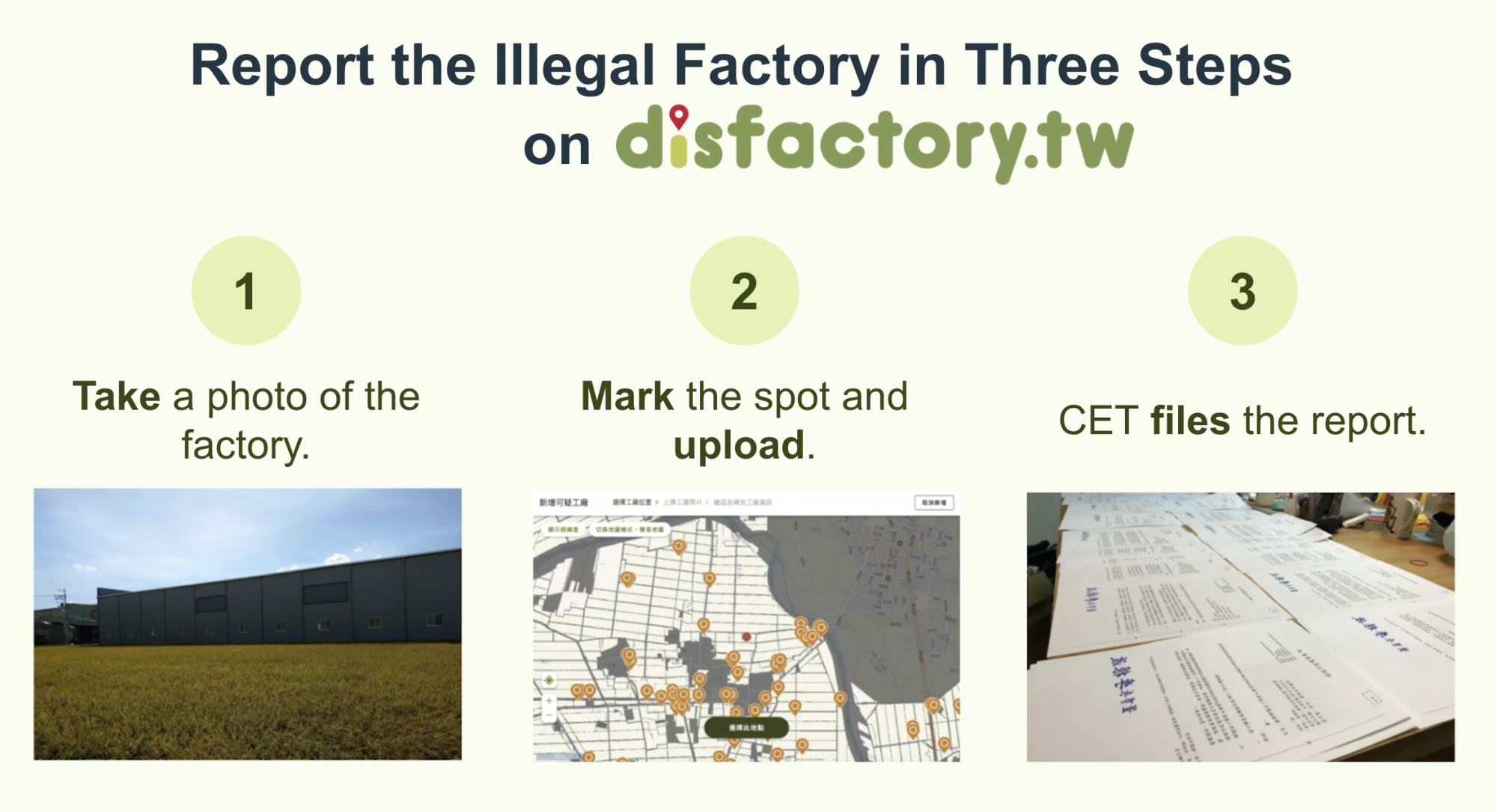 That is how you create a new pin on the map. In the past 13 months, there have been 812 cases reported by citizens on Disfactory, a crowdsourcing platform for reporting illegal factories on farmlands in Taiwan. The platform is co-developed by g0v (pronounced as “gov-zero”), a civic tech community, and CET, an environmental advocacy NPO (non-profit organization).

On average, Taiwan is losing 1500 hectares of farmland through illegal usage per year, with illegal factories accounting for the greatest usage, according to an survey by the Council of Agriculture (COA).

These factories have been polluting the environment of food production and nearby population. For instance, the waste water discharged by one electroplating factory will result in nearby farmlands having at least 3 years of fallowness and requiring expensive remediation to remove the heavy metals absorbed in the soil.

They also present a tremendous fire hazard since they lack sufficient fire hydrants and are constructed mainly with metal sheets that collapse easily. In the past 5 years, 8 firefighters were killed when battling the fire in illegal buildings on the farmlands.

However, the local governments in Taiwan have been reluctant to inspect and punish these land-use violations. 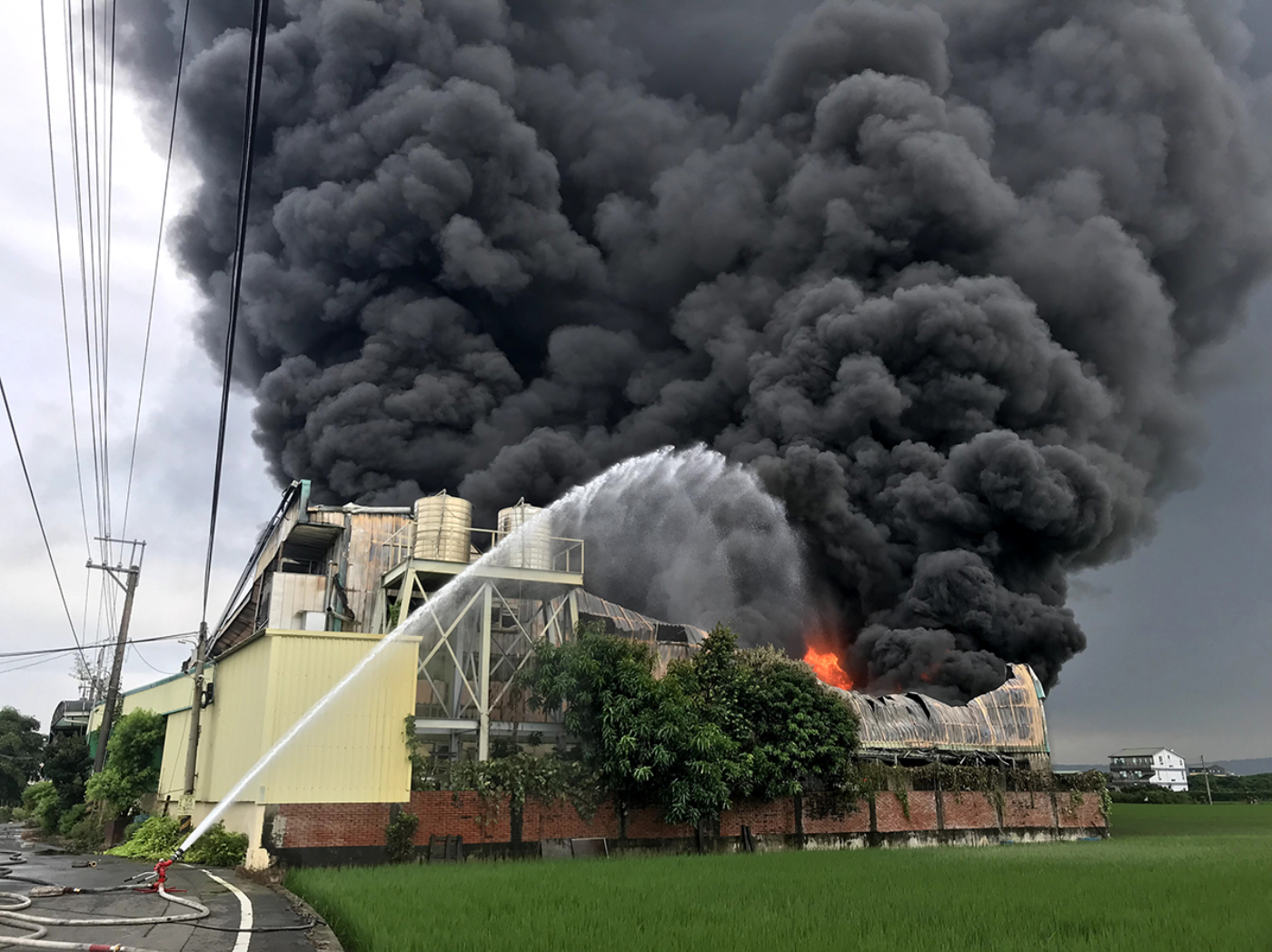 Photo of a factory on fire in Puxing, Changhua. In this case, there was no fire hydrants within 1 kilometer radius. Photo Credit: National Association for Firefighters’Rights.(Source/Disfactory)

Since illegal factories endanger the farmland the most in terms of pollution, public safety and equity, it is the primary concern in CET’s farmland preservation campaign.

“Citizens of Earth, Taiwan” (CET), an environmentalist group established in Kaohsiung, Taiwan in 2007, has been advocating sustainable forestry, transition of petrochemical and mining industries, energy transition, and farmland preservation for over a decade. Since illegal factories endanger the farmland the most in terms of pollution, public safety and equity, it is the primary concern in CET’s farmland preservation campaign.

In 2019, Factory Management Act amendment mandated local governments’ urgent action against unregistered factories constructed after 2016, such as suspending their electrical or water service, or even demolishing them outright. The abruptly added Article 28-1 was a concession to the environmentalists in balance to pardoning most of the existing illegal factories.

CET is worried that the law will not be enforced because of the reluctance of local governments and tight relationships among rural communities in Taiwan. First, there are not enough resources available for the government to track down all illegal factories on its own. Secondly, stopping illegal factory construction may provoke local interest groups’ discontent.

CET believes that only massive crowdsourced reports from the citizens and disclosure of overall inspecting progress that can hold the government accountable. However, the official reporting process is frustrating and requesting personal ID, which puts reporters at risk.

To mobilize reporting by citizens at scale, one CET staff member went to a g0v hackathon in 2019 in hopes of building something better than a confusing Google Form. With no prior knowledge of digital product development, there they found professionals in design, web development, geographic information system (GIS), and product management to join the project for the cause.

It was like building a team with various talents in the movie Ocean’s Eleven except that no one gets paid and that everything is default open. Every meeting memo, every code ever written and every datapoint without personal information is open under open-source licenses. The online workspace such as Slack (an instant-message communication program) and weekly meetups are also open for anyone to participate in any forms.

This openness enables loose but productive collaboration among more than 40 community contributors across 5 time zones –including 12 weekly active core developers– for nearly 2 years so far. Together, the team has spent their free time building a dashboard, a map to reported factories, and an admin page for CET staff to semi-automatically follow up on all reports. 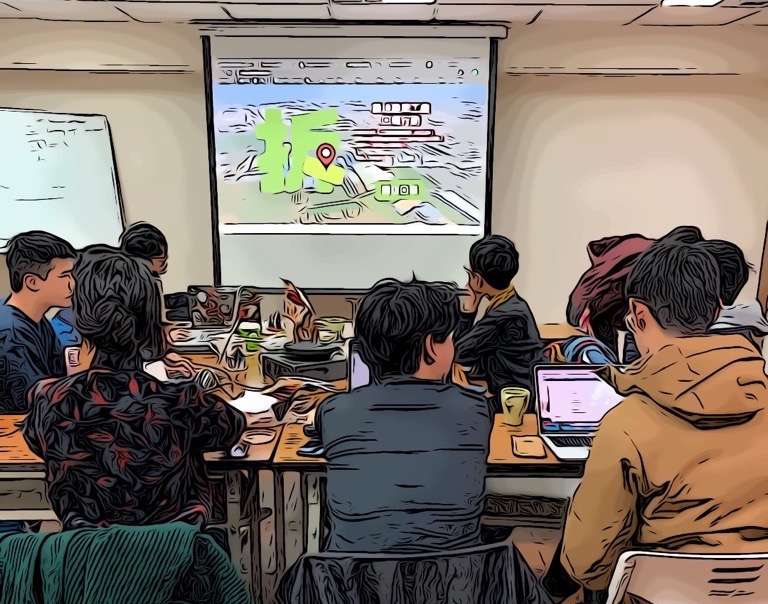 From March 19th, 2020 to April 30th, 2021, there are 812 sites reported, of which 531 sites are new to the government's inspected records. Out of 308 reports CET has filed to the government, 8 factories were torn down. The rest are still held in administrative process.

CET and other advocacy groups keep pushing the government on the issue and have seen some progress, for example, on requesting open data in machine readable formats. Furthermore, the Ministry of Economic Affairs has tightened the admission of electricity application on the farmland as a response.

The number of factories that have been demolished is just one metric to measure Disfactory’s impact. With the long-term goal of advocacy, impact, and capacity building, Disfactory is experimenting in new collaboration models of advocacy. The digital platform serves as a vehicle to mobilize micro-civic participation for both awareness and aggregated data for further applications. An open, data-centric culture then could be slowly embedded in advocacy strategies at organizational levels. Most of all, the Disfactory team has developed a kind of cozy and open collaboration dynamics between an agenda-driven NPO and independent, open-source community participants.

The ongoing challenge for Disfactory is to engage more citizens in the initiative against illegal factories on farmlands. A developing idea is to build a “spot the difference” game on satellite images for the crowd to mark new factories built after 2016 – which by law should be demolished– from over 50,000 suspected sites.

It is always a long way from one citizen’s action to overall society changes. Disfactory attempts to make that journey shorter, less bumpy, and less lonely – with open collaboration and some help from technology. It is a large field, and we are planting a seed to harvest a flourishing civic tech and digital democracy ecosystem.

(SL, bdon and caleb also contributed to the article)

（本文為2021/5/11天下雜誌投書：By Ael,Deeper/Disfactory – save the farmlands by open source technology and crowdsourcing）